We are operating from 13 April under Orange Light operations.

PLEASE BE AT THE STATIONS HALF AN HOUR BEFORE DEPARTURE

PLEASE NOTE THAT THE 1:00pm TRAIN DURING THE WEEK AND WEEKEND IS THE LAST TRIP FROM WAIKINO.

PASSENGERS: Please be aware that there is a lot of privet out at the moment.  Please take necessary precautions if you have allergies.

The public SHOULD only be wearing masks when travelling in the enclosed carriages.

With the expansion of the Martha Mine to peak production, Waihi in the 1900s was one of the largest boroughs in the country.

This growth of population, combined with the materials required to operate such a large mining enterprise prompted the Government of the day to link Waihi to the main North Island rail network. This was completed in 1905 and for the next 23 years Waihi was the end of the line.

After surveying a number of options to link the growing Bay of Plenty District to the main rail network, an extension of the Waihi branch was chosen. This was completed in 1928 and the Frankton to Taneatua branch line as it was known ran through the Waihi section until 1979. 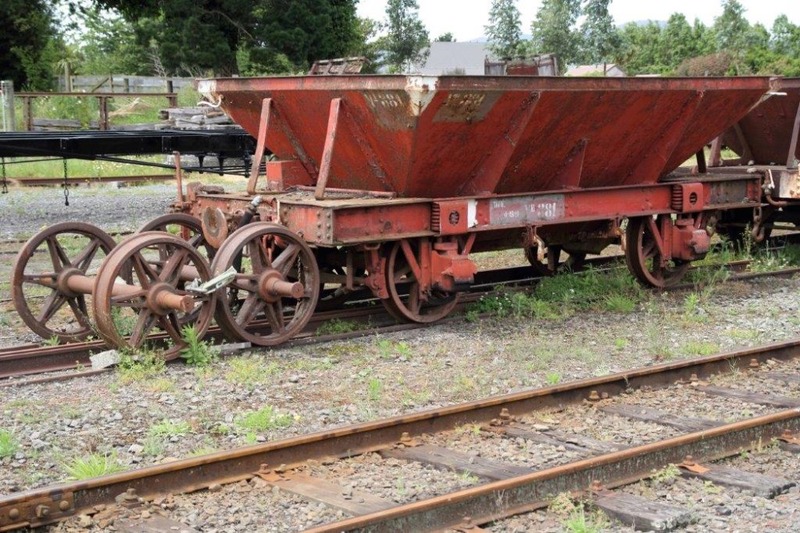 The closure of the Waihi section to commercial traffic was brought about by the need for a shorter and more viable route to carry the ever increasing export tonnage to the port of Tauranga. The Paeroa to Waihi section was never originally intended as a ‘through line’. Its narrow tunnel, step gradients and tight curves were, as traffic increased becoming more difficult to maintain.

A nine kilometre-long tunnel cut through the main dividing range to the south of Waihi better served the needs of the port and the opening of the Kaimai Tunnel in 1979 concluded the working life of the Paeroa to Apata section. Soon after closure the track structure was dismantled, and with the exception of the 6 kilometres of track between Waikino and Waihi, was lost forever.

The History of Waihi Station

The Waihi station building itself was constructed from a variation of the standard NZR plans known as “Troup B” type.

The architect Gorge Troup was born in London in 1863 arrived in this country in 1884, working in an architectural capacity for the NZR from 1888 to 1925.

Most New Zealand Railway buildings designed by him continued to be built until 1945. George Troup is better known for his design and construction of the Dunedin Railway Station still in use today. 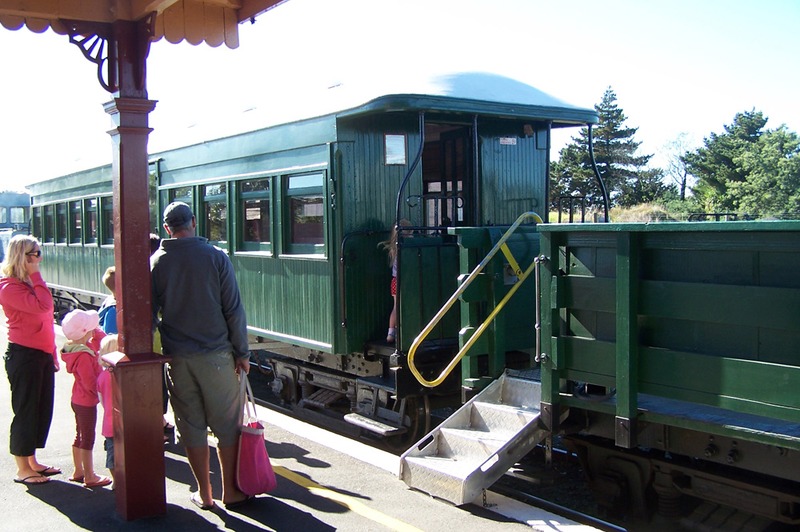 Originally the Waihi station was constructed with an open public area where the bell hangs today, with the ladies restrooms to the right and luggage rooms where the modern toilet facilities are today. Doors were added and other modifications were made until 1950. At this time the arrangement was reversed with the ladies restrooms & the luggage area changing ends of the station, with a further 3 metres being added to the building. 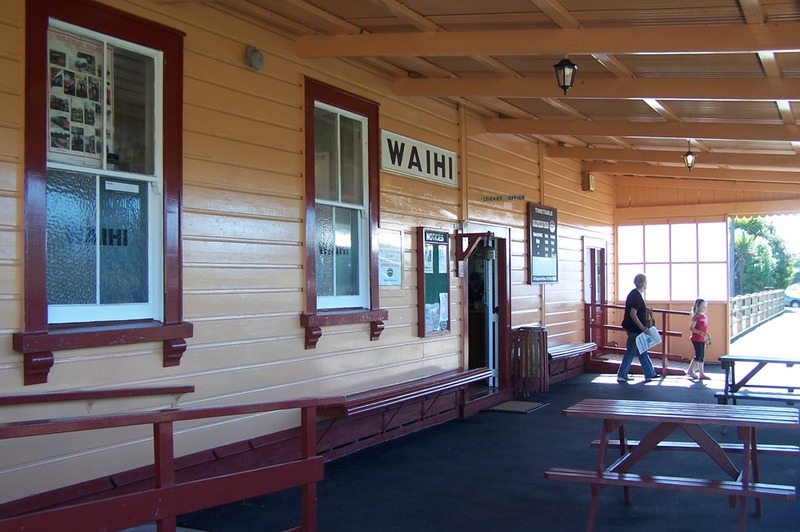 Today the buildings are classified as Category II by the New Zealand Historic Places Trust and bear a B classification from the Rail Heritage Trust.

Waihi Station is the last ex-NZR station to retain its original buildings.

The Government set the gauge for the developing New Zealand Railway system as 3’ 6” between the rails. This was considered a cheaper practice so saving money by reducing the cost of the railway formations, but at least was one gauge and thus avoided problems facing other countries with the proliferation of different gauged systems.

Internationally this is considered ‘Narrow Gauge’ with the international standard gauge being 4’ 8.5”.

Levers were situated at the northern end of the station-building platform operated both signals. A wire cable was used between the Gainstroke (throw over) type levers to the distant signals by pulleys.

During darkness the signals were lit with a kerosene lamp behind each spectacle lens, but these were replaced by electric lights in 1950.

The goods shed is the standard ‘through road’ from the New Zealand Railways 1904 NZR Engineers Notebook Plan (Coom 1904:16). The stockyards were also an integral part of the railway scene in the early part of the 1900s.

Beyond the visible steel yards and the present fertilizer shed, was the line for the Waihi Gold mining Company’s rake line used to carry gold bearing ore down to the Waikino Battery for processing.

Once opened the Waihi Station became the terminus for the next 22 years until the next stage to Athenree was opened to revenue earning traffic in 1924. When it opened, it was handling 5 return trains daily to Paeroa, and on closure in 1978, 9 return trains passed through Waihi.

For safety reasons tablet working was introduced between Waihi and Paeroa around 1906 with a tablet machine installed in the station for the Waihi-Waikino section. In 1930 with the change in status of the Waikino and Karangahake Station, a second tablet machine was required. There were never more than two tablet machines at Waihi, as the tablet system was not extended beyond this station.

The unusual style derrick crane alongside the train has it’s own it own life story to be told. When the railway yard was opened, there was no crane, so one was installed in 1906. However the 4-ton crane was removed in 1928 and replaced in 1940 by a much smaller one and a half ton version. In 1952 the present 4-ton model was installed after shifting from Rotorua.

The line traveled on today used to be part of what was then known as the East Coast Main Trunk Line. This departed Auckland for Frankton, then across country to Morrinsville, Te Aroha, Paeroa, through the Karangahake Gorge to Waihi, through the Athenree Gorge to Katikati, down to Tauranga, Te Maunga (Mt Maunganui), Te Puke and to its terminal at Taneatua.

Originally the line was meant to join up with the Gisborne to Napier railway line and work did commence from both ends. However two World Wars, an economic depression plus a terrible influenza epidemic interrupted development so the join through the Waioeka Gorge never occurred.

Where did that railway go?

The railway is long gone, but for those with sharp eyes there is still plenty to see…

To follow the railway line today is a very rewarding trip. The remains of the rail/road bridge at western end of the Karangahake Gorge is still in use as a road bridge with the railway having been replaced by a walking bridge. The bridge leaving the tunnel is crossed on foot, and the current walkway goes right through to the bridge at Waikino where only the original piers remain.

The existing walkway bridge is higher, as the railway used to cross the main road into the Waikino Station. This is where the Goldfields Railway terminus is. 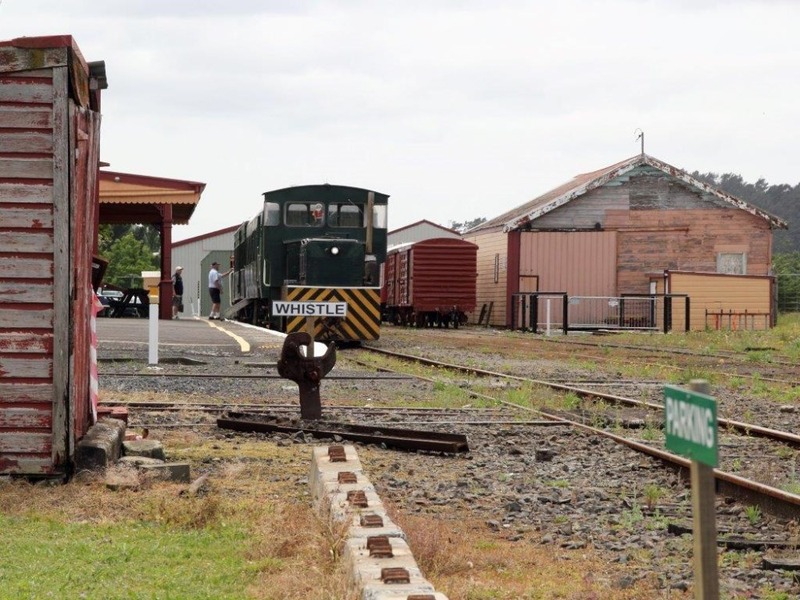 The line to Athenree is more difficult to follow as much of the remains have been obliterated by development. At the eastern end of the station yard, a steel girder bridge crossed Victoria Street. A line of concrete piers carried steel bridges about 500 metres to cross the still visible historic concrete bridge over the Martha Mine Tramway at the end of Station Road. The line continued to a road crossing at the junction of Silverton & Quarry Roads, before travelling east to cross Christiansen St, through what is now a rough paddock.

The line next crossed Adams Street with a steel girder bridge, crossing Wellington Street before crossing the Ohinemuri River at the end of Rosemont Rd heading south away from town. The concrete piles and remaining embankment are worth a visit. Running parallel to State Highway Two out of Waihi, the line used a road crossing to pass over Crean Rd just after the one-way bridge over a stream. The line then followed a path through the countryside passing close to the old cheese factory crossing Ford Road about 500 metres past a creek bridge after the old Dairy Factory. The remains of a concrete culvert and lower formation are just visible on the northern side of the road.

The railway line then crossed Woodlands Road about 500 metres from the main road, again using a road crossing. The remains of earthworks and the concrete base of an aspect light signal are visible on the left. The line continued down to the intersection of Old Tauranga Rd and State Highway Two, before going under the main road where there used to be a one-way bridge about 150 metres to the north of the existing highway. This bridge has been removed, so lowering the highway. The embankment remains clearly visible on the eastern side of the road with the line then headed towards the sea away from the road.

At the bottom of the hill with Mathers Rd is on your left the railway rejoined the highway. Travel up Mathers Rd about 1 km on breaking out of the trees, a curved embankment can be seen with the curve coming toward you before crossing the road. A local farmer has changed the shape at the closest end of the embankment, with a farm race heading further east. The earthworks cross the road by the farm gate and head into a deep cutting just visible amongst the trees about Mathers Road, opening out onto the remains of embankment.

The new section of the State Highway rejoins the old road near the Pancake House Café before winding around several corners to a very sharp corner.

The Athenree Station was immediately above the road here and the house still there was one of the original railways working men’s quarters. A steel girder bridge crossed the road with the railway formation, continuing on between the sea and the main road. Many remains of the old formation and bridges etc can be seen from State Highway Two on the journey to Katikati.

Hear from our volunteers: 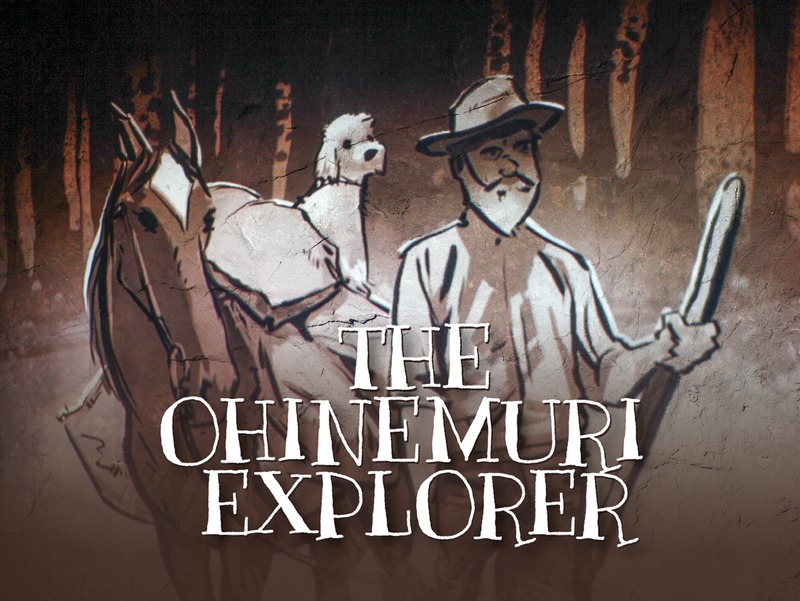